M. Night Shyamalan Teases ‘Old’ at Tribeca: “No One Has Ever Seen Anything Like It” 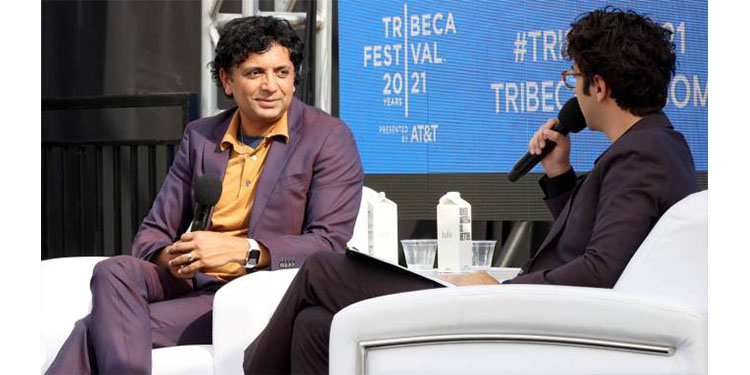 M. Night Shyamalan Teases ‘Old’ at Tribeca: “No One Has Ever Seen Anything Like It”

M. Night Shyamalan left an audience of Tribeca Festival attendees wanting more on Friday evening, specifically with regard to his upcoming film Old.

An adaption of Frederik Peeters and Pierre Oscar Lévy’s graphic novel Sandcastle, Old follows a family on a tropical holiday, who discover that the secluded beach where they’re relaxing for a few hours is somehow causing them to age rapidly, reducing their entire lives into a single day.

“No one has ever seen anything like it — in its tone and the way it’s just, I mean, it’s like nothing else,” Shyamalan said, sitting alongside one of Old‘s stars, Alex Wolff.

The intriguingly vague comment about the film was one of many made by the director — “inappropriate” and “subversive” were other terms thrown out — throughout his 60-minute conversation with Wolff, though the ambiguity could be due in part to the fact that Old, set for a July 23 release, isn’t quite finished yet.

“I’m deciding on the minor note; how to end on a minor note,” Shyamalan explained, citing the final moments of 2000’s Unbreakable and Samuel L. Jackson’s character Elijah Price as an example. “Unbreakable ends on a kind of a dip, right? He goes to the dark note, that minor note at the end. The guy you thought was the best friend is the villain. … The minor note sticks to you forever.”

There’s no telling where the filmmaker, who’s developed a reputation as the master of the twist ending, will take Old, but Shyamalan did note that the flick will be finished in a week.

Already, Old seems to hold a special place in Shyamalan’s heart. He grouped it with Unbreakable and Lady in the Water as being the most “him” films, as Wolff put it. On top of that, the movie’s focus on aging reminds him of his father and other loved ones.

“My father’s very old right now. He has dementia. He comes and goes,” Shyamalan said. “And the kids are now directing and singing concerts and, you know, when did this happen? So I made a movie about that feeling.”

This, of course, was no small feat in a global pandemic.

“We all went to the Dominican [Republic], and at that time, the way we were making the movie was very new,” Shyamalan recalled. “I was making up the rules because I was the first one, so I said, ‘We’re all gonna stay in this hotel. I’m gonna pay for everybody’ — the cleaning ladies, the caterers, everyone, the reception person, the person parking our cars, everybody staying with us — and if they commit to these 10 weeks, I’ll cover everything and we just go from the hotel to the beach, back and forth, every day.”

Shyamalan’s approach seemed to work, as he claimed “we didn’t have a single positive [COVID-19] case” the entire shoot. What did threaten the film was something entirely different: hurricane season.

“Because of people’s schedules, I couldn’t have this cast if I waited,” he explained. “And so I made the choice, just thinking about what’s important to me. And honestly, it was because I wanted to make this movie with [this cast] that I took the risk. We took the risk. And, of course, there was a hurricane, and it just took the sets and just destroyed them.”

The crew was ultimately tasked with rebuilding everything, but there was still another obstacle to overcome.

“The beach had been eroded away,” Shyamalan revealed. “There was no beach for our beach movie.”

His solution? Working at the behest of nature and nature alone.

“We got very lucky. By day one, part of the beach came back, so we shot on that side and then we became very versed with nature, like the tides and storms out 100 miles away and how many times the water comes up per day,” Shyamalan said. “Honestly, we were allowed to be on that beach. That was Mother Nature allowing us to be there. We had 40, I don’t know, 40 days where we needed good weather—we got 40 days of good weather.”

On the last day of shooting, the cast and crew even paid their respects to the beach with a ceremony they learned about from locals. As Wolff recalled, “We did this one ritual at the end. I was like, ‘God, I don’t know any other filmmaker who would take the space so seriously to go and drop off flowers in the ocean.’”